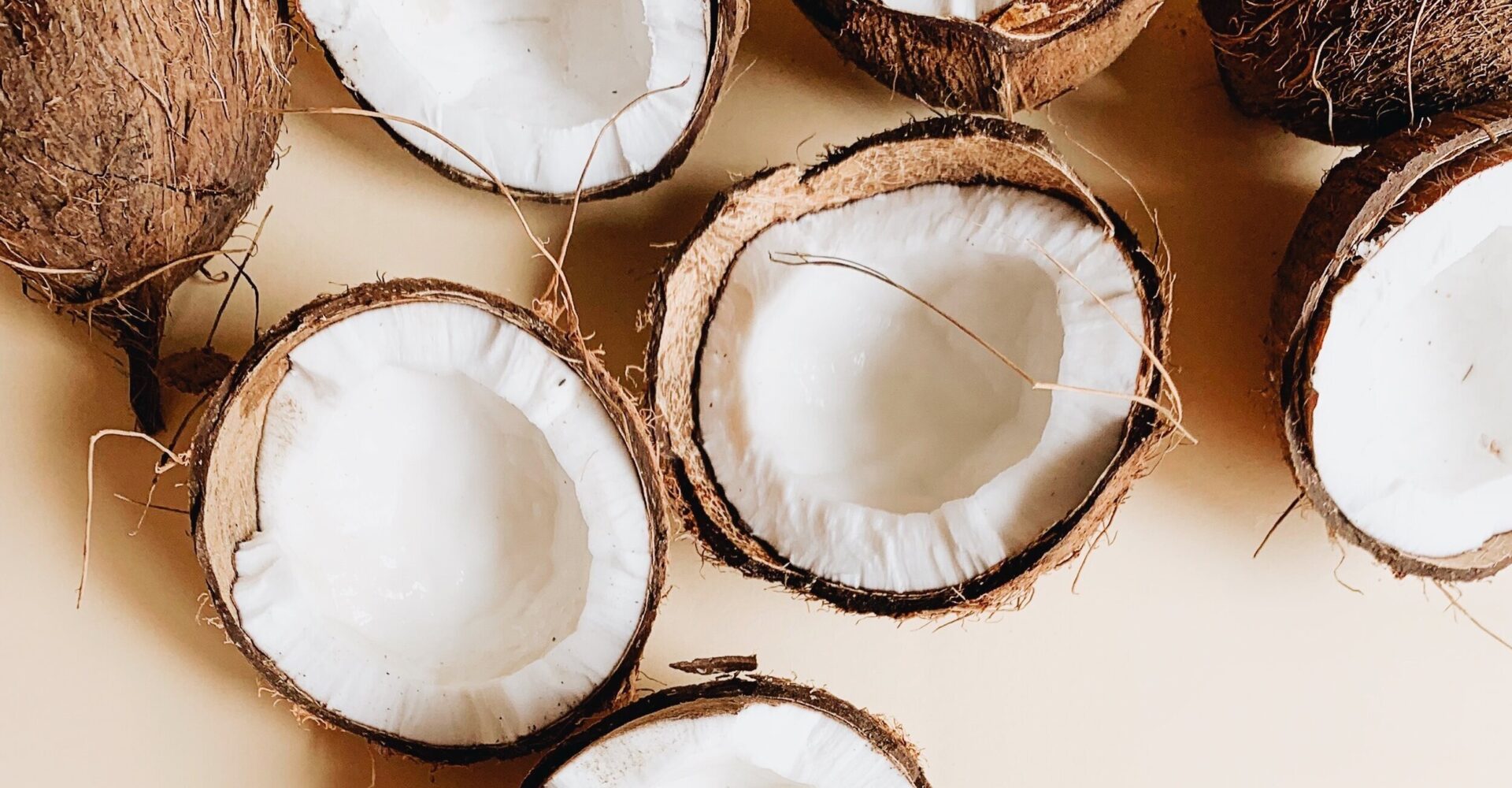 Cracking the history of coconuts

The history of coconuts and how they traveled around the world.

The coconut palm has entwined itself into human history for thousands of years. People can find coconut everywhere, from tropical coasts to global groceries’ shelves. In many cultures that have been dependent upon coconut through time, the coconut palm is called the “tree of life,” as it has provided them shelter, sustenance, and succor. Seeing it growing on every subtropical coastline around the world, we might think it originated from subtropical areas. But some genetic tests have shown that the coconut originated in India and Southeast Asia. The nut might have floated, making its way to other parts of the world by traversing both hemispheres.

The history of coconuts began in India

Historians believe coconut has also traveled at the hands of men. They say Arab mariner traders have carried coconuts from India to East Africa through the sea around 2000 years ago. Even today, Arabs call coconut “zhawzhat al-hind” which means “walnut of India” in Arabic.

Arab mariner traders encountered coconuts when trading with Indians who sailed small boats made of coconut-wood planking that were lashed together using coconut fiber. Arab mariner traders adopted the dhow. These boats are still made today, but with modern materials. 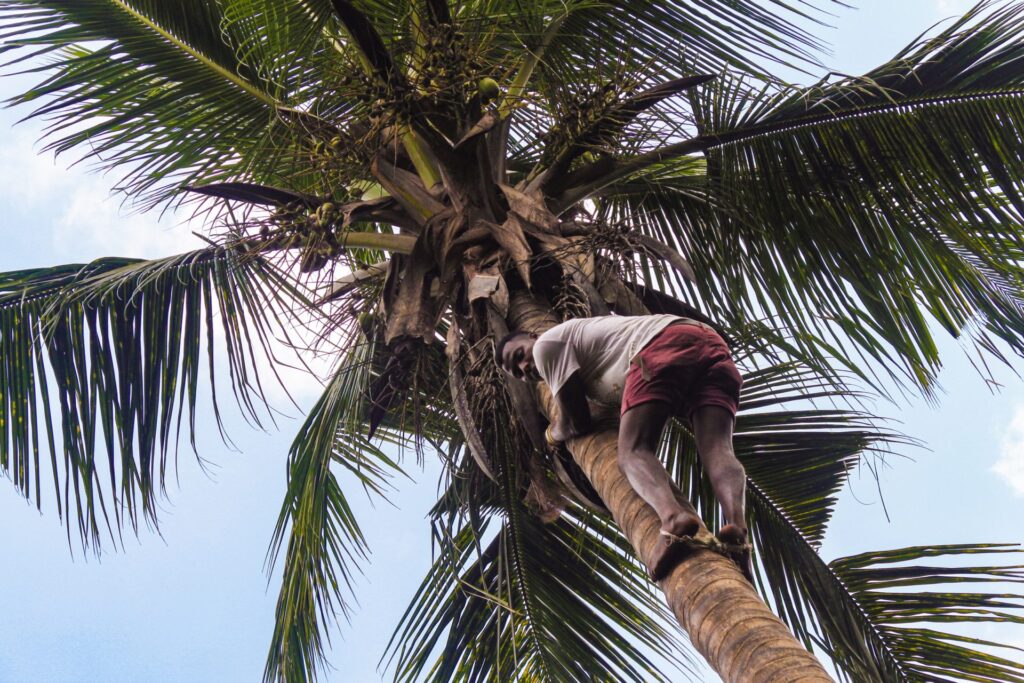 Arab traders then introduced coconut to Europeans, first along the Silk Roads. Marco Polo encountered the coconut palm in Egypt in the 13th century, and called the fruit “the Pharaoh’s nut.”

The role of the Silk Roads in the history of coconuts

Coconut came to Europe through the maritime Silk Road at the beginning of the 16th century, when some explorer-colonizers were seeking a direct trade route between India and Portugal.

Pigafetta, a Venetian nobleman, and one of history’s first adventure tourists traveled to India in the early 16th century. He made particular note of the fruit in his travel journal. He wrote that coconuts are the fruit of the palm trees, and Indians get their vinegar, wine, oil, and bread from this tree. The coconut tree lasts for a hundred years, and with two coconut palm trees, ten people can sustain themselves.

Coconut making its way to where we call America nowadays was a result of the dark side of the European sea trade: colonialism and slave trade. This trade brought coconuts and other plants from India and thrived in America’s moist, subtropical climate.

Nowadays, in the Western world, professional and top amateur athletes drink coconut water for its natural electrolytic properties, which resulted in coconut water being heavily marketed as a beverage. The marketing has raised coconut water’s consumption rates significantly. The Philippines, the world’s biggest coconut producer, has increased its export of fresh coconuts by more than 80 percent. Production, export, and processing of coconut have become a global industry worth several billion dollars.

Now, coconut is a big part of the food industry as people are using its products including coconut water, coconut oil, coconut milk, yogurt, and ice cream as alternative dairies, and snacks like coconut chips, in their daily life more and more every day. It is also a good substitution for some foods that should be omitted from vegan foods, for example using coconut oil instead of butter. 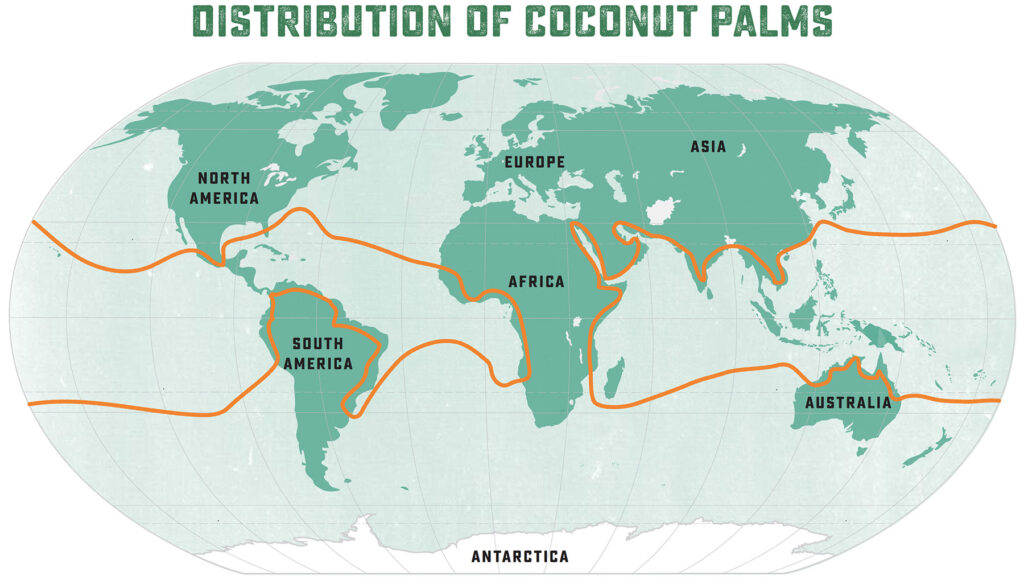 Centuries after when Arab mariner traders introduced coconut to all parts of the world, the fruit and its all processed variations has become a global ingredient. Surprisingly, coconut still sustains many aspects of life since it is used in the health and beauty industry, and even in household cleaning products.

If you click on this link, you will redirect to:
JourneyBlog.ca
Check out the Trips News on the JourneyBlog.ca : Ever wondered about Willow tree

Coconut in other parts of the world

In its more native geographies like South India, East Africa, and Southeast Asia, using coconuts in many different aspects of life. Coconut is a staple ingredient in their foods, bread, beverages, and desserts.

In Zanzibar, each day in the market begins with the purchase of coconut and the opening and processing of it into milk. The women in Zanzibar know how to grate coconut meat, and how to make rooﬁng material from coconut leaves and rope from its fibers.

If you are a coconut lover, you can search for some recipes from countries that are located in the regions named, and enjoy the new tastes of recipes you have never seen before.