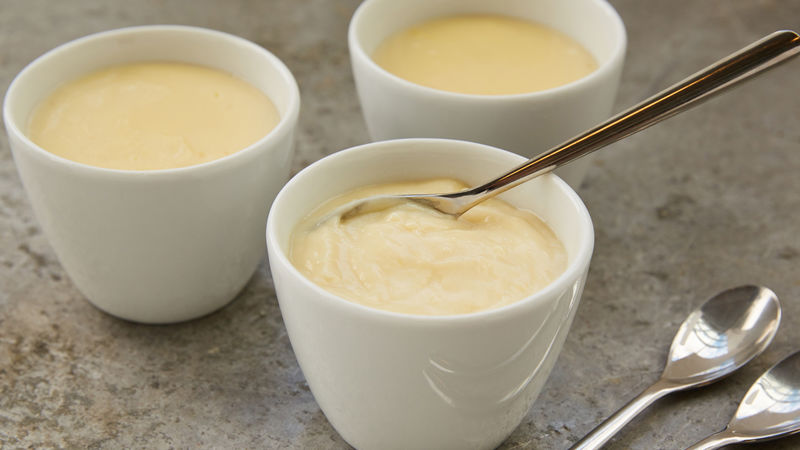 One of the best things about homemade pudding is how versatile it is. It can be served on its own or with berries, whipped cream, cookies, or sliced bananas. It’s delicious when piled in a trifle or topped with fruit sauce. Note: You may also put a large dish of pudding in the fridge and sneak a taste (or two) every time you open the door. That’s not a bad concept. If you want to know how to make vanilla pudding, read on!

This is a traditional, delicious dessert that I return to again and again — and I hope you will as well! It’s past time to give homemade pudding the credit it deserves. Pudding has to be the most underappreciated dessert of all time. It’s not as opulent as a pot de crème, mousse, or crème brûlée. It’s soothing, nostalgic, and straightforward, and that’s what I like about it!

You’ve been missing out if you’ve only ever tasted boxed/store-bought pudding. Yes, it takes a bit more work than peeling back the foil on a plastic cup, but once you try it, you’ll never go back. Most (if not all?) of these ingredients are most likely already in your kitchen. Take a look at how simple it is.

How to prepare vanilla pudding

Mix together sugar, and cornstarch, and salt, and milk, and egg yolks in a medium saucepan. Cook, whisking periodically (every minute or two), over medium-low heat until the mixture is bubbling all the way through (this took 7-8 minutes for mine).

Once boiling, heat for one to two minutes more, whisking once or twice but not too aggressively (this can break down the binding properties). The pudding should be thickened but still pourable at this point; it will thicken further as it cools. Take the pan from the heat and whisk in the butter and vanilla extract.

Place a fine mesh strainer over a large heatproof dish to remove lumps. Pour the mixture through a sieve into a mixing dish. If you don’t see any lumps in your pudding, you can skip this step.

Place the pudding in a large mixing basin or individual serving dishes. Cool until lukewarm, then wrap in plastic wrap. Refrigerate for several hours, or until well cooled.

With LeGout Instant Vanilla Cream Pudding and Pie Filling, you can make delicious desserts in less time. This dry pudding mix, which can be used as a pie and pastry filling or as the foundation for a vanilla pudding dessert, provides busy cooks with a quick and dependable choice for making delectable meals that customers will like.

How to use LeGout Vanilla Instant Pudding 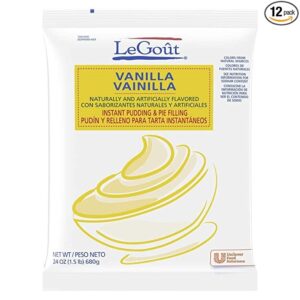 Their standards are what distinguishes them, and their quality is what keeps them supplying cupboards, fridges, and freezers with the best natural and organic 365 Everyday Value items on a daily basis. They get enthusiastic about whole grain flours, shade-grown coffee, organic milk, and frozen vegetables because they know you care about cooking with the greatest ingredients – without sacrificing the stuff you don’t want. Whole Foods Market quality requirements are met by all 365 Everyday Value goods. 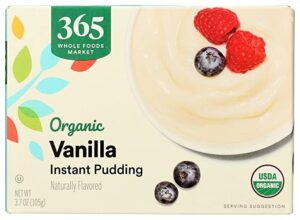 Jell-O Cook & Serve Vanilla Sugar Free & Fat Free Pudding & Pie Filling Mix Cook and Serve Jell-O Sugar Free Vanilla Pudding has a delightful flavour, whether you eat it as a treat or use it to your favourite dessert dish. Alternatively, use to make delectable meals such as a thick poke cake or vanilla pudding pie! This sugar-free pudding contains no fat and only 1/3 the calories of traditional chocolate pudding.

So you may now experience the delectable flavour of Jell-O pudding without the fat. Jell-O vanilla pudding mix is sold in 0.8 ounce resealable packets. Simply whisk cold milk with the fat-free pudding mix and place in the refrigerator for 5 minutes to set. 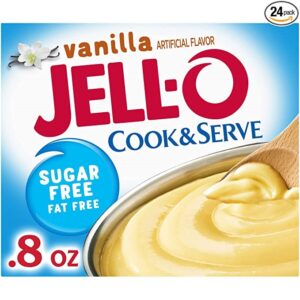